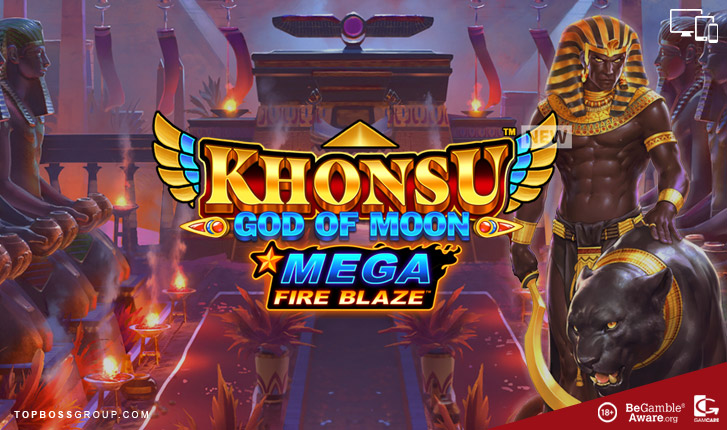 Khonso God of Moon has been rated by our slots review team and scores an awesome 83% based from the category ratings overall.

Play Khonso God of Moon At These Top Rated Casinos

Khonsu God of Moon is based on the Ancient Egyptian lunar deity and is another new release in Playtech’s Mega Fire Blaze jackpot series. This slot game has five reels, three rows, and 30 ways to win. It also has some great Bonus Features like the Hold and Respins, Free Spins, Expanding Symbols, Retriggerable Respins and four-tiered Jackpots.

Khonsu is the giver of life, and he is one of the most important Egyptian Gods in Ancient Mythology, and he is also the God that marked the passage of time. Time to place your bets and pay homage to this powerful God and see what blessings he bestows upon you in this Mega Fire Blaze slot with wins of up to 2000x your stake.

During the Free Spins, reels expand if any Wild or Moon symbol lands on reels 2, 3 or 4.

The Mega Fire Blaze feature triggers by landing six or more Moon Symbols. The Moon symbols have a cash value or a Star, held in place on the reels, and players receive 3 Respins. Any new Moon symbols landed after that get locked into place, and the respins reset to 3.

This feature has a pleasant twist to it, and that’s the presence of keys on certain Moon symbols. Collect two keys to open another row on the game grid. The fun doesn’t stop there; collect enough coins to open 7, 8 or 9 rows and enjoy the benefits of 2x, 5x or 10x Multipliers.

Players have the chance of winning each Jackpot in Khonsu Mega Fire Blaze slot multiple times. The Jackpot is won by getting the Jackpot Star symbol on the grid. It will then transform into one of the following Jackpots:

The Mega Fire Blaze feature is a winner as it unlocks rows to get Multipliers in the Hold and Respin feature adding to the appeal of Khonsu God of Moon slot. Even better is that players do not have to fill the whole grid to win the 2000x Grand Jackpot, as it can be revealed via the Star Jackpot symbols. It’s a slot with a sold potential and generous payouts in this medium volatility slot with an RTP of 96.49%