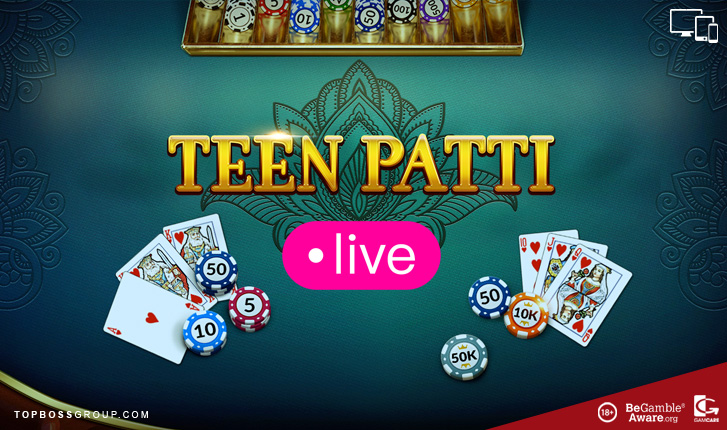 Teen Patti means three cards in Hindu, and it comes from the name of the game itself where each player receives three cards. The game got its inspiration from an English card game called three-card brag. Teen Patti has a robust cultural background in India and often played at many Indian social gatherings. The game is wildly popular during Indian Holidays such as Diwali and Janmashtami.

How to Play Teen Patti

Live Teen Patti plays with a single deck of cards at a kidney-shaped table with three betting positions, each of which has spots for Ante, Bet and Pair+. Granted the table is nothing like the Giant Blackjack table at San Manuel Casino but its a decent size.

It starts with the player placing a bet on Ante after which the dealer hands out three cards to each of the players as well as three to themselves. Not all of the cards are face down, and players have to decide whether to Call or Fold—folding results in the loss of Ante. To continue playing an additional wager equal to the Ante bet must be made. Once all the players have made their respective decisions, the dealer will turn the cards face up.

If your opponent fails to qualify with Queen High or better, all other participating players receive payment on their Ante bet. Should the dealer qualify with a higher value hand, the players lose it all however if your hand is more substantial than the dealer’s players win both Ante and Bet wagers.

In Teen Patti Indian Poker, both the Ante and Bet stakes pay even money. Ante Bonus pays 1:1 for Straight, 3:1 for Straight Flush, 4:1 for Three of a Kind and 5: 1 for Three Aces. There is also a Pair Plus bet, and the outcome of the main game does not impact the Pair Plus outcome; however, players need to place a Bet wager to receive payment on this optional side bet.

Teen Patti has grown in popularity hence more live casino developers adding it to their gaming lobby such as:

Fans of Teen Patti Indian Poker can sign up and play it at any one of the following reputable and popular online casinos:

Teen Patti has always been a popular game in India; however, it was generally played for fun and not real money. That changed when it went live at online casinos. Another plus is that players from India can enjoy hassle-free banking when playing online with Indian online casinos adding the UPI Netbanking to their banking options and more Indian online gamblers are playing Teen Patti on mobile which is becoming the way to play online.

You don’t have to play Teen Patti at an Indian Casino only, it is also available at International casinos such as Slotman Casino.