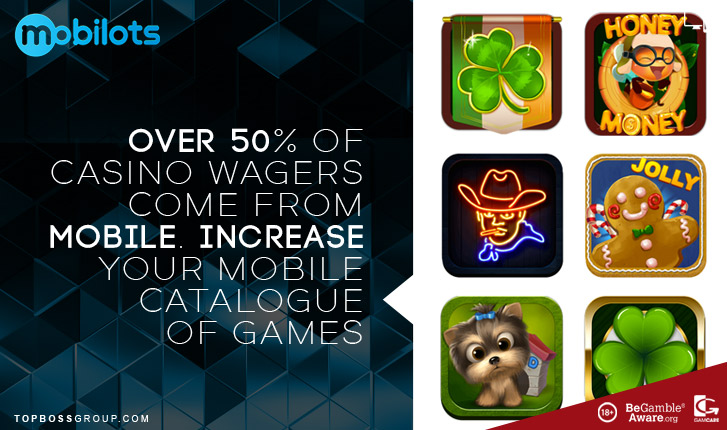 Our review team has rated Mobilots Casino Games on the categories below and Mobilots scores an awesome 79% ratings overall.

Mobilots is a relatively new company with a cutting-edge team of technicians, mathematicians, animators and graphic designers with 75 years of collective experience. Their true passion is mobile slots and they live to brainstorm, design, develop, test, and release successful games on a continuous basis.

Mobilots is managed from three international offices. The design of the software allows players to integrate games quickly and easily. All Mobilots content is compatible with desktops and mobile devices using HTML5 technologies.

The games feature 3D graphics and multiple paytables that can be adjusted at any time. Some important features of their games include; multi-languages and multi-currencies.

In 2017, Mobilots added Bitcoins to accepted currencies which also include Euro, US Dollars and British Pound.

How Many Games does Mobilots Have?

Mobilots has over 30 unique games with 3D graphics and crisp picture quality.

What Awards Has Mobilots Won?

Currently Mobilots has not won any awards.

How did Mobilots Begin?

The official launch of Mobilots was in 2016 to actively create e-gaming products and back-end software required by the modern gambling community.

What type of Slots and Games does Mobilots offer?

The majority of games are video slots, with a few video poker games added to the portfolio such as Deuces Wild, Jacks or Better, Tens or Better. The video slots paylines average between 20 to 30, Arcade slots mostly have the 243 ways to win.

The reel configuration most frequently used is 5×3 although some arcade and jackpot games have a 5×5 grid such as Frutti Friends and Halloween Emojis.

Popular features include Expanding Wilds, Bonus Rounds Free Spins and Cascading symbols with Multipliers. Sometimes the bonus sessions continue until the player loses which can be seen in the Piñata Pop.

Does Mobilots offer a Progressive Jackpot?

Mobilots has medium volatility slots which are common for jackpot releases such as Rags to Riches or Sugar Kisses, but they don’t have a network of Progressive jackpots like Microgaming for example.

Does Mobilots have a Mobile Platform?

All the HTML5 games are mobile optimized and can be enjoyed on most mobile devices, laptop, laptop and desktop.