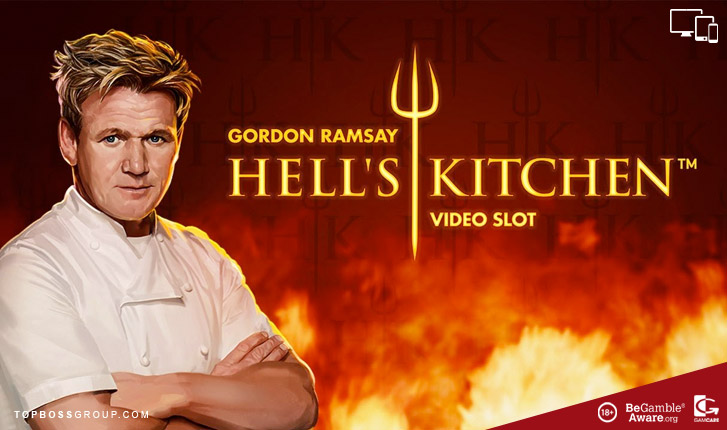 Hell’s Kitchen Slot has been rated by our slots review team and scores an awesome 84% based on the category ratings overall.

Hells Kitchen Slot – Gordon Ramsay appears on the reels of NetEnts slot based on the TV show Hell’s Kitchen. This slot plays out on five reels, three rows and 20 win ways and has delectable visuals, plenty of side dish features and some spiced up action commentary from Gordon himself, who is on his best behaviour. By that, I mean no swearing. Hell’s Kitchen is a low volatility slot, and players can win up to 1000x their stake in this hot, hot slot. It is a very popular slot at Karamba Casino and Mr Vegas.

Gordon’s signature dishes represent the highest paying symbols, and the symbols are Beef Wellington, the Spicy Burger, Gordon signature Cocktail. Other symbols include sticky toffee pudding and the classic Royals.

As Gordon is known for throwing things at the chefs in the Kitchen and this slot game, things are no different. In the main game, he may throw knives, pots or plates at the reels; however, this is positive as they turn symbols into Wilds, giving players between 5 and 7 wilds when he does have a tantrum.

Free Spins are the second ingredient in Hell’s Kitchen, and it adds a ton of flavour to the game. In this feature, players need to select a team that is red or blue. The teams go head to head, and no matter what team you have chosen to be on, you still reap the rewards be it Multipliers or Random Wilds; it’s yours for the taking.

If the team you are on wins, you enter a Pick and Click Bonus Game; this is like in any recipe, the final and most crucial ingredient. Here you are presented with 15 menus, and three of these menus have crosses on the back of them. They are the ones you hope you never choose as they eliminate you immediately. Choose the right menu and stand in line for a prize-winning dish.

Hell’s Kitchen video slot is superb. Furthermore, players get a toned-down version of the world’s most foul-mouthed chef in the game. There is tons of fun and action without any French, and it’s evident that Gordon enjoyed being part of this newly released game from NetEnt. It’s a low volatility slot with plenty of features, and players do not have to worry about their bankroll with frequent wins. Hell’s Kitchen deserves a Michelin Star.