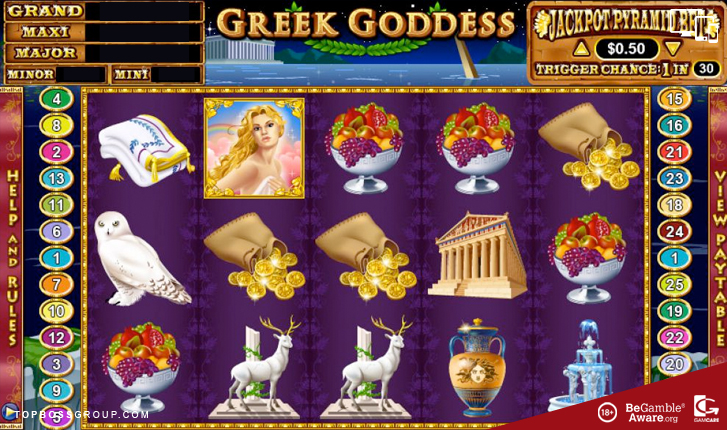 Greek Goddess has been rated by our slots review team and scores an excellent 86% based from the category ratings overall.

The slots theme is based on some of the most notorious Greek Goddesses in Greek Mythology and takes place in Mount Olympus and has a top win starting at $75000.

This is a slot that caters to all budgets and players can bet between $0.01-$25 a game. The number of paylines in this game can also be adjusted as well as the coin size ($0.01-$1). You will also see an additional Pyramid Bet in the top right hand corner of the game

A Mountain of Symbols:

The symbols you will encounter in Greek Goddess are Athena, Aphrodite, Athena’s Owl, Aphrodite’s Stag, a Golden Apple, Temple, Fountain, Bag of Coins, Bowl of Fruit, a Vase, a Throw and a Wine Bag.

Athena is the games Wild Symbol. She appears on the 1st and 5th reels and can substitute every other symbol. If she assists you in getting a winning combination your winnings will be doubled.

The Golden Apple is the Scatter Symbol and appears on any reels. It also triggers the Bonus Feature when at least three appear

The Blessing of the Goddesses:

This feature can be triggered when you land three or more of the Golden Apple symbols in any position on the reels. When this happens you are rewarded with 7 Free Spins and all your winnings doubled.

The second Athena Free Spins Feature is triggered by a combo of Athena and Golden Apple Symbols. Below is the combos and awarded Free Spins

Any winnings during the Free Spins Rounds will be tripled.

If you decide to play the Jackpot Pyramid Bonus game which is an interactive jackpot game, you will be taken to a separate screen. Here you will be met with a multi layered Pyramid. You then need to ascend up the Pyramid opening a variation of vaults along the way.

Inside the vaults you will come across one of the three colored idols. If it’s the Green idol you will be given the chance to open another vault. If the grace of the Gods is on your side and you get the Gold Idol it will complete the existing level you are on and you may continue climbing to the top. The Red Idol on the other hand will end the Bonus Round.

To get into this feature players will need to place a side bet of at least $0.05 up to $2.50 so you have a winning chance at the Progressive Jackpots.

It can be said that Athena’s love and the Golden Apples bring two substantial rewards when playing Greek Goddess. The Jackpot Pyramid feature is one filled with excitement and anticipation and this new slot can be played at Buzzluck Casino, Brango Casino as well as Lucky Club Casino. Start those reels spinning and join the Greek Goddesses at the top of Mt Olympus for a jackpot worth 9000 coins for 5 Aphrodite symbols. 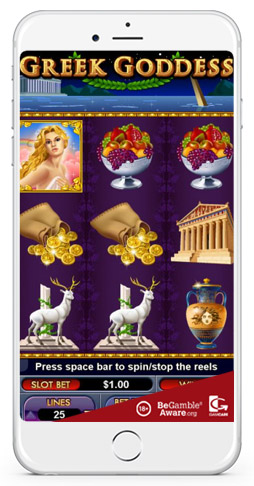