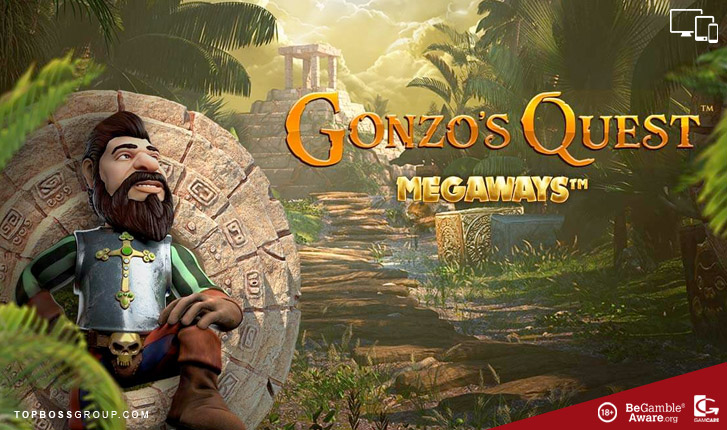 Gonzo's Quest Megaways Slot has been rated by our slots review team and scores an awesome 78% based from the category ratings overall.

Gonzos Quest Megaways Slot is a cascading reels slot game that builds on the best and most popular features of the original slot Gonzo’s Quest. Red Tiger Gaming has developed the new Gonzo’s Quest in collaboration with NetEnt.

Gonzo’s Quest Megaways offers players 117649 ways to win players can land some super wins of up to 20000x their stake. The Bonus game is also rewarding with Cascading Wins, Increasing Multipliers up to 15x, Free Spins and the popular Earthquake Feature.

The original Gonzo’s Quest Video Slot was the first game to introduce Cascading Reels, and Increasing Multipliers and players will be over the moon to know those features are also available in the new version of the game. The highly anticipated release has an added layer of excitement with the celebrated Megaways functionality which is licensed by Big Time Gaming varying the ways to win on each spin.

The new action-packed Gonzo’s Quest Megaways invites players to embark on a journey with the charming Spanish Explorer in his quest for El Dorado with intrepid adventurers and huge wins.

Symbols include low-value animal symbols which appear on stone slabs like birds, alligators and snakes. The Mayan Mask symbols with the health symbol are the most lucrative as it can pay up to 15x your stake.

Gonzo’s Quest Megaways Video Slot has a total of six Bonus Features, and they include Avalanches, a random Earthquake Feature, Unbreakable Wilds and many more to keep those reels spinning and the wins increasing. The following are the games Bonus Features:

The Avalanche Feature was initially in the original version of Gonzo’s Quest and players will be over the moon knowing it also available in the Megaways version of the game. In the Avalanche Feature symbols fall into positions instead of spinning. The winning symbols explode and disappear, allowing space for an Avalanche of new symbols allowing you more winning chances. This feature will continue until no further wins occur.

Players need to be on the lookout for the games Wild which is represented by a Question Mark. Not only does it substitute for other symbols up to two Wilds can land on the reels on the same spin triggering the Unbreakable Wild Feature. These Wilds do not explode; instead, they remain on the reels for more wins.

The Earthquake Feature is random, and you know when this feature is in play as the games suddenly start shaking. Only high paying symbols then replace all low-value symbols.

When you receive your Free Spins, it starts the Royal Wheel Feature. Here players can choose to play with the number of Free Spins awarded or gamble for more Free Spins. If you are lucky enough you could land up playing with up to 25 Free Spins with an Avalanche Multiplier with values of up to 3x higher than in the original slot game, meaning possible Multipliers of up to 15x.

The Gonzo’s Quest Megaways is similar to the original slot game. It has the Avalanche, Free Fall and Multipliers Features. The Megaways, however, add a few extras taking it to a whole new level. The Earthquake and Unbreakable Wilds also bring in some decent wins. Overall it’s a winner with amazing graphics, superb soundtrack and wins of up to 20000x your stake.