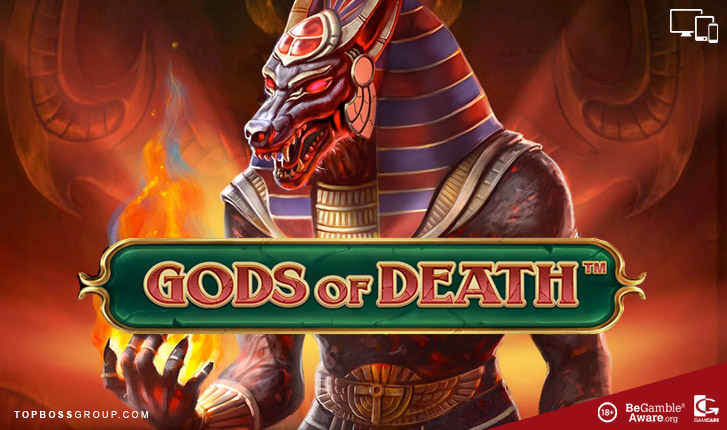 Gods of Death has been rated by our slots review team and scores an awesome 85% based from the category ratings overall.

Play Gods of Death At These Top Rated Casinos

Stakelogic will have you digging up tombs and looking for treasures in their God of Death Slot. It’s a 5 reels 3 row 10 paylines slot with some amazing and unique features.

Gods of Death is amongst the first slot using the new Super Stake Bonus Feature. When this triggers, it delivers multiple symbols of the same type bringing you a screen filled with winning combinations.

The theme is Ancient Egyptian and may not be one of the most imaginative. However, their features such as Expanding Wilds, Free Spins with Walking Wild Symbols and the Tornado Feature sure make up for the redundant theme.

Time to raise the Dead and see what the Gods have in store for you.

The betting range in Gods of Death starts off at $0.10 with the maximum being $40 per payline. This high variance slot has an RTOP of 96.00%.

The high paying symbols are those that take on an Alien form and the low-value symbols are the usual Royals which are multi-coloured.

The Snake Queen is the Expanding Wild which you can expect to get on multiple reels but only expands on the 3rd reel.

This is unique to Stakelogic and the Super SATAKE Bonus allows a player to double their bet and allow for a possible Bonus Spin in the slots base game. This feature will deliver some very generous extra wins.

In the Super Stake Bonus Feature, there are two types of Bonus spins, the first one can remove all the Royals from the reels and the second is where 175 Wilds are added to the reels.

This one will blow you away. The Tornado feature can trigger after every non-winning spin. When it is triggered one of the reels is selected and one or more of the other reels transform into an exact copy of that reel. The Tornado Feature can only trigger in the base game.

The Free Spins Feature triggers when three or more Pharaoh Scatter Symbols are in view.

When the Mummy another Scatter lands on the reels during the Free Spins Feature it will expand and cover the entire reel, making it a Wild Reel. After each spin the Mummy Symbol moves left one reel on each subsequent Free Spin until such time as it leaves the game.

The Mummy Symbols will always land on reels 1 and 5 and they substitute for all the other symbols bar the Pharaoh Scatter Symbol. They are also only active during the Free Spins Feature. Lastly in Gods of Death the Free Spins can be Re-Triggered allowing for some extra potential prizes.

Gods of Death slot allows players to gamble their win amount. If the players opts to compete an overlay will appear with a blind card and players will get the option to gamble on colour or suit. Once a choice has been made the card will reveal what it is. If you get the colour right your bet is multiplied by 2, whereas if you bet on the correct suit your bet is multiplied by 4.

Should you bet be incorrect the Gamble Feature ends.

Gods of Death is a unique and graphically stunning new slot by Stakelogic. It excites and horrifies all whilst offering the amazing Super Stake Bonus, Free Spins and the Tornado Feature. This is a Video Slot that is very popular at LocoWin Casino and we guarantee you will not be disappointed. 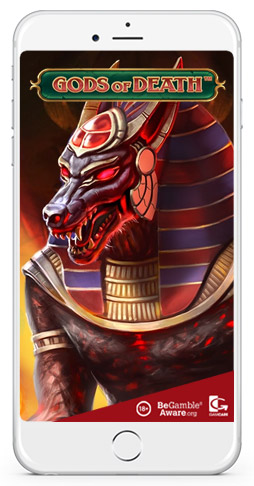