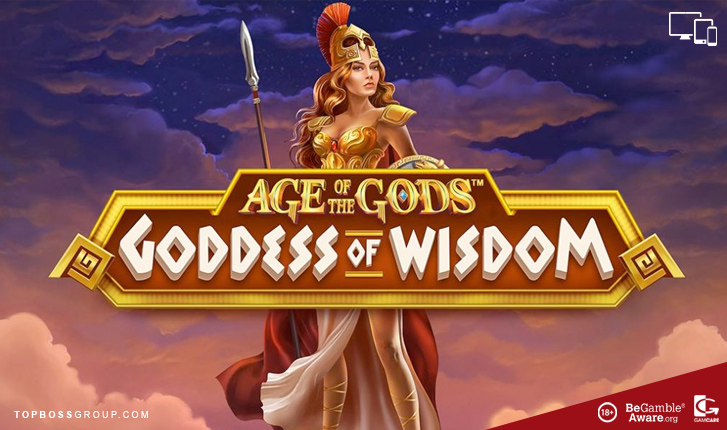 Age of the Gods Goddess of Wisdom has been rated by our slots review team and scores an awesome 85% based from the category ratings overall.

Play Goddess of Wisdom At These Top Rated Casinos

Goddess of Wisdom Slot – Age of the Gods

When you start playing this video slot you will see the golden reels are held up by pillars. The backdrop is a distant view of magnificent Greek structures just for some extra adornment.

The Goddess of Wisdom slot focuses on Athena one of the many characters found in the soap opera of Mt Olympus.

She however is considered one of the most prominent figures in Greek Mythology as she acts as the Goddess of Wisdom and War. H placid temperament stood her in good stead as she was not easily enraged so she made level-headed decisions. Now its up to you to do the same as you experience the just rewards this benevolent Goddess has to offer.

Age of the Gods- Goddess of Wisdom allows you the option to play with any number of pay-lines down to the minimum of 1.

There are 5 high value symbols and they are items all connected to Athena. A glorious helmet, a golden breastplate, Silver Sandals, a Shield and her brooch. The lower value symbols are 9,10, J, Q, K, and the A. There is also an Olive Branch which is often depicted as a symbol of peace.

Athena represents the Wild Symbol and only appears on reels 2, 3 and 4. She substitutes for all the other symbols bar the Scatter to form winning combinations.

The Scatter in Age of the Gods- Goddess of Wisdom is Athena’s Owl and it is key to the main feature.

This feature is triggered by landing 3 of Athena’s Owl anywhere on the reels, when this occurs you will be prompted to choose one of the three Free Spin Options.

Once you have made your choice any Wilds landing on the reels during this round will expand to fill the entire reel, Free Spins however cannot be triggered when playing your choice.

The Goddess of Wisdom Slot bestows upon you some Heavenly Progressive Jackpots with four ever growing kitties. These can won during a bonus side game that is randomly activated. Players who play with higher bets will stand a far better chance of triggering  the Progressive Jackpot Bonus.

A Slot of Superior Proportions:

This top-notch slot by Playtech comes with three bonus games and allows players to enjoy some almighty spins. Time to see what this Goddess of erudite wisdom has to offer.

Casino Offers Sign Up To Play Goddess of Wisdom

Goddess of Wisdom - Age of the Gods Overview

Slots Title: Goddess of Wisdom - Age of the Gods

Age of the Gods Goddess of Wisdom Mobile Slot 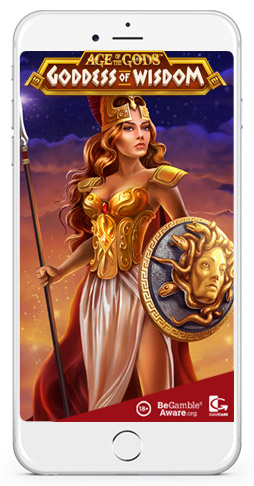