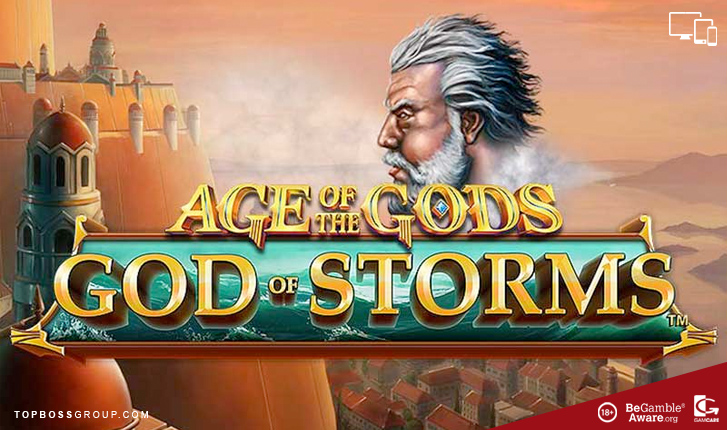 Age Of The Gods God Of Storms has been rated by our slots review team and scores an excellent 87% based from the category ratings overall.

Play God Of Storms At These Top Rated Casinos

God of Storms Slot is a new Age of the Gods Slot which features Aeolus, the King of the winds. Join Aeolus the Greek God of Wind in this medium variance slot game released by Playtech in June 2017, another exceptional addition to their Age of the Gods Slots.

The minute you launch this game you will be awestruck by the magnificent graphics and cinematic soundtrack, with a storyline based on Aeolus.

Aeolus is the King of the winds and was appointed by Zeus to guard the storm winds, he does however not appear on the reels as a symbol. Instead he appears on the right side of the reels when a feature is triggered awarding Multipliers.

When playing Age of the Gods – God of the Storms you can bet between $0.25 up to $250 per spin and these paylines can be adjusted before placing your bet. You also have the option of playing in Turbo Mode to add to the adrenalin rush.

The symbols that you will find on the reels of the God of the Storms slot game are the Spartan, Artemis, the Greek Goddess of Hunt, the Archer, a Greek Vase and Hydra. These symbols are your high value symbols whereas the low playing symbols are represented by the playing card icons.

This slot comes with two features and both involve the Wild symbol which only appears on the three central reels.
The regular Wild will appear on the reels as Stacked Wilds assisting you in completing your winning combinations. The Ship which is your second Wild has a dual purpose, it substitutes for all your other symbols and it triggers the Wild Wind Re-Spin Feature.

This feature is triggered by the second Wild which is represented by the Ship, and when triggered it covers the reel completely and the God appears on the right-hand side of the reels and he blows with all his might moving the Wild one position to the left awarding you with a Re-Spin and your pay-outs can be as high as a 5x Multiplier.

This feature ends when the Ship is blown off the reels.

Age of the Gods – God of Storms maximum payout is 12500 coins and the top paying symbol is Spartan who awards you with 500 coins.

Higher payouts are all thanks to the stacked Wilds and the Multipliers during the Wild Wind Respins Feature.

The aesthetics of this game are sensational. It’s the godly theme that will attract many players, especially the players that enjoy the fantasy themes.

There is also a broad range of betting options, Progressive Jackpots that can be won by any player, Stacked Wilds and Multipliers which will please the more experienced gamblers due to its many facets.

Bring on the Winds of Change and play Age of the Gods – God of Storms.

Prev Next 1 of 3
age of the godsprogressive slot

Age Of The Gods God Of Storms Overview

Slots Title: Age Of The Gods God Of Storms 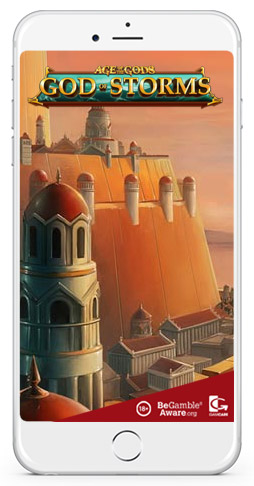