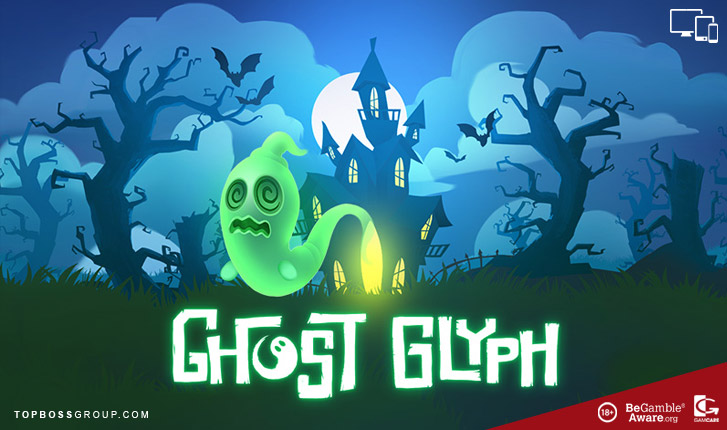 Ghost Glyph has been rated by our slots review team and scores an awesome 85% based from the category ratings overall.

Ghost Glyph Slot by Quickspin is a new release to help players celebrate Halloween. As the title implies in this, massive 7×7 grid slot game with Cluster pays it is a ghost theme. You will be happy to know that the ghosts in Ghost Glyph are helpful and oh so friendly and not the type to make your hair stand on end.

All players stand a chance to win up to $226,000 on a single spin when playing at the maximum bet. The visuals are super bringing the game to life and allowing for immersive gameplay as you join the paranormal creatures as they unveil the hidden secrets of the bizarre environment.

The soundtrack is another highlight as it blends in with the theme entirely creating the right ambience as embark on this bizarre and ghost friendly
adventure.

The betting in this medium to high volatility powered slot starts at $0.20 to $100 per spin, which is a wide betting range that will appeal to both high rollers and players on a smaller budget. Ghost Glyph has an RTP of 96.18%.

The low-value symbols are a few patterned coins including stars, moons, spider webs and skulls. The higher paying symbols include a variety of precious gems which are emeralds, rubies and diamonds.

As previously mentioned Ghost Glyph comes with a Cluster Pays mechanic. Players will need to land a minimum of 5 horizontally or vertically matched symbols to score a win. The highest payouts are for clusters of 15+ symbols which will award you 15x your bet for low-value symbols. The premium symbols award you 150x, 300x and 600x your bet.

The Tumble Mechanic is one of the games central features. When a winning cluster is made all the symbols that were part of the winning combination get removed. New symbols then tumble down onto the reels filling the empty spaces.

Once a winning cluster removes, a Ghost Glyph appears in one of the gaps and will keep appearing after each winning cascade. This symbol triggers the Ghost Urn Feature and acts as a wild substituting any other regular symbol.

The Ghost Glyph triggers the Ghost Urns Feature, and when it’s part of the winning Cluster, it’s collected to fill one of the five urns which are determined randomly at the start of each spin.

In total, the game has 4 Ghost Urns, linked to specific ghosts. The filled Urns after each non-winning cascade assisting players in forming new winning clusters. Each of the Urns award specific bonuses which are as follows:

The fifth Urn activates the Free Spins Round where there are initially 8 Free Spins up for grabs. New Urns appear during the Bonus Game, and there is a meter that monitors paranormal activity on the opposite side of the reels. Players need eight tumbles to fill the Paranormality meter which in turn unlocks a Massive Wild Feature.

Quickspin has a winner in Ghost Glyph Slot. This New Video slot delivers an outstanding level on entertainment, and every aspect of the game is primo. It boasts an impressive feature set, superb visuals which are charming and pleasing to the eye. The Cluster Pays, Urn extras and Tumbling Mechanics result in immersive and action-packed online gameplay. Moreover, Ghost Glyph Slot has a hit frequency of 33% combined with a moderate feature hit rate in the base game. Thus ensuring players kept entertained by the friendly ghostly creatures in Ghost Glyph. It’s a must add to your list of slots to play during Halloween.

Other Halloween themed slots you may enjoy are Microgaming’s Halloween Slot and Halloween Horrors.