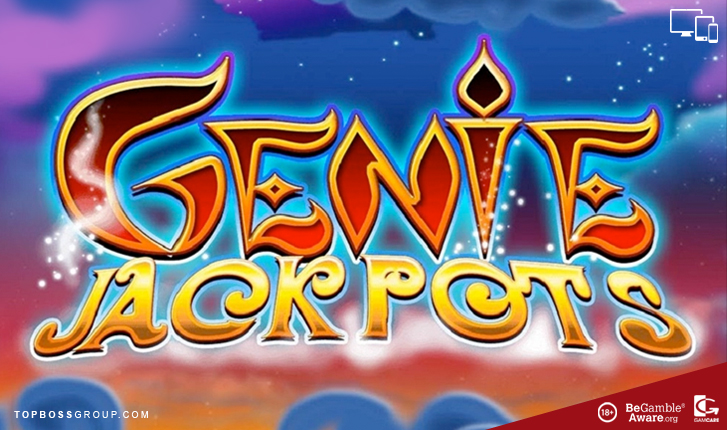 Genie Jackpots Vegas Millions has been rated by our slots review team and scores an excellent 86% based from the category ratings overall.

This 35 reel 20 pay lines slot is one of Blueprints latest Progressive Jackpot releases. It is very popular with players at Leo Vegas and William Hill . The theme is an Arabian Genie theme and comes with three exciting features which are the Mystery Win Bonus and the Magic Carpet Bonus as well as the 3 Wishes Power Spins.

The reels of this colorful slot machine are encased in a metallic frame that resemble an oriental trader’s tent. The Golden Lamp is found at the bottom right hand corner. This is where Genie randomly appears, granting you your wish and helping you make your dreams come true.

This slot is of medium volatility with a betting range of between $0.20 -$500 max.  The slots RTP is 95.73% which includes the Progressive Jackpot.

The symbols in Genie Jackpots Vegas Millions start at the low end with the card royals and they award between 5 x and 10 x your bet for a 5 of a kind.

They are followed by medium paying symbols. These include a Genie’s Turban, a Persian tea carafe, a pair of glittering Swords and the slot logo. Should you hit 5 of a kind you can win anything between 15 x and 20 x your stake.

The Monkey is this slots Wild symbol and it substitutes for all the regular paying symbols. This yields 25 x your stake should you be lucky enough to land 5 of a kind.

The game has three Scatter Symbols and they are a Carpet, Treasure Chest and a Green Bonus icon.

This feature is triggered when you land 2 Bonus Scatters (Green Icon) on reels 1 and 3 and a Chest Scatter on reel 5. The Genie will appear standing next to a glorious chest in his Treasure room.

He will then tap the chest with his Magic Mallet, rewarding the player with some magnificent cash prizes. These will  be added into the Bonus Win Panel. Once this has been done the player will be prompted to pick any one of the 3 lamps. Should the Genie once again be revealed he will award you with some more prizes.

This feature continues until such time as COLLECT is revealed from one of the lamps.

This feature is triggered when a player lands 2 Bonus Scatter Symbols which are the green icons on reels 1 and 3 as well as a Magic Carpet Scatter. The player then needs to select a lamp so as to progress along the trail.

Once you reveal a Genie you will be magically transported to a random position in front of the trail. Move on to reach the cloud which comes with a silver lining of up to 1000 x your stake.

When the Genie appears randomly from the lamp from the lamp during the game it will trigger the 3 Wishes Power Spin. A player can then select a lamp to reveal a wish. Choose wisely as you are only allowed to choose one of the lamps. The chosen lamp will reveal one of 3 bonuses:

Now remember there is a chance that the Vegas Millions Bonus can be triggered randomly during any spin.

This slot is part of the Vegas Millions Network which has 5 Progressive jackpots which can be won during the Re-Spins Feature and a percentage of each bet in the Blueprint Gaming Network contributes to the jackpots. To hit the big win you will need to land 5 or more Vegas Millions overlay icons in one spin to enter the Bonus Game. The jackpots that can be won are the Super, Mega, Major, Royal and Vegas Jackpot.

This new online slot by Blueprint Gaming has a rich mixture of features with average pay-outs of 1000x your stake and the excitement of playing this slot game Genie Jackpots Vegas Millions is all about the Progressive Jackpots where the Genie could grant your wish of becoming an instant millionaire. 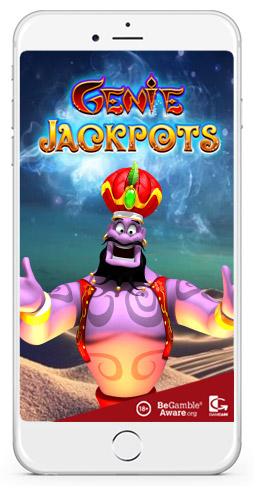