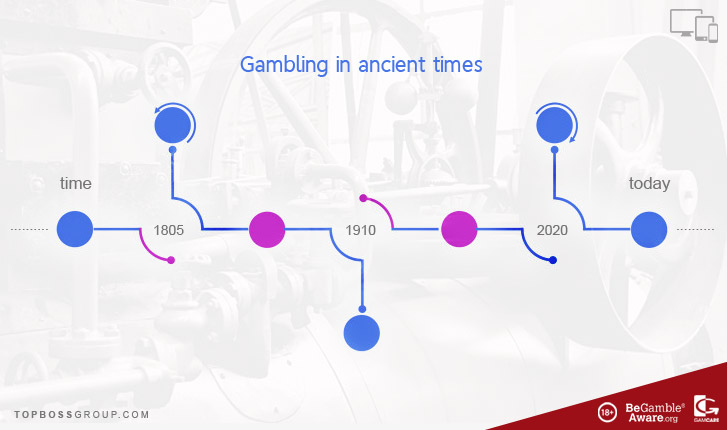 When you think of gambling, your mind probably conjures an image of a fabulous casino in Vegas or Monte Carlo. You might even picture some of the flashy online video slots, millions of us enjoy every day. But gambling, believe it or not, is not a modern pastime. Though it may not have always looked as glamourous as it does today, it’s something that’s been around for thousands and thousands of years.

It’s supposed that gambling began way back in ancient China during the Xia Dynasty before it spread to other parts of the world.

As well as early types of lottery and bingo-like games such as Keno, historians have found evidence to suggest board games were popular ancient Chinese activities. Liubo (which translates to ‘six sticks’) saw two plucky players race one another around a board using sticks to perform the same function as dice. It flourished right up until the end of the Han Dynasty until the game of Go came along.

In Go, players move pieces (called ‘stones’) to try and surround more territory than their opponent. It’s a little more complicated than chess, but the rules are relatively simple. Even today, it’s still a test of luck and strategy.

Gambling was also popular in ancient Greece. References to it are in the works of Homer (the Greek writer who penned The Iliad and The Odyssey) as well as other literature of the same period. The Greeks believed that their gods controlled luck. There are even tales of how the rulers of Mount Olympus cast lots to divide the universe between them. Ancient gambling books say that Zeus won the heavens, Poseidon won the sea and Hades drew the short straw, walking away with the underworld.

The ancient Greeks enjoyed betting on Tilia (a game similar to checkers), Heads and Tails as well as many different dice-rolling games. Ancient artefacts reveal that bets on dog, chicken and bird fights were also common.

But despite being so widely practised during the period, many ancient Greek philosophers strongly opposed gambling. They described it as a form of plague.

Gambling in ancient times was the subject of similarly mixed opinions a few hundred years later in ancient Rome. From the slaves to the masters, many Romans fell prey to the addictiveness of gambling, including Emperor Caesar Augustus.

The ruler, therefore, decided to outlaw the practice, branding it a vice. However, the gambling ban was lifted during the week-long festival of Saturnalia (held in honour of the god Saturn). Therefore many continued to engage in risk-taking games despite the threat of a fine. Augustus himself was a frequent violator of the ban.

Amongst some of the most popular kinds of Roman gambling were bets on chariot racing. Although it was a particularly dangerous event, and the cause of many fatalities, chariot racing flourished around 735 BC. The Circus Maximus, one of the largest areas built for the sport, could seat over 200,000 Roman gamblers.

The forms of gambling popular during the ancient Chinese, Greek and Roman civilisations have undoubtedly influenced the way we bet today. However, thanks to dramatic advancements in technology, gambling has evolved phenomenally.

The move online a few decades ago means we can now place bets with just a few taps on our smartphones. There is no need for dealers and Vegas Employees as it is all done online. Sites like Betroom24 Casino give us access to hundreds of slot, table and bingo games wherever we may be. And as the industry continues to grow, the future only looks to get even more exciting.