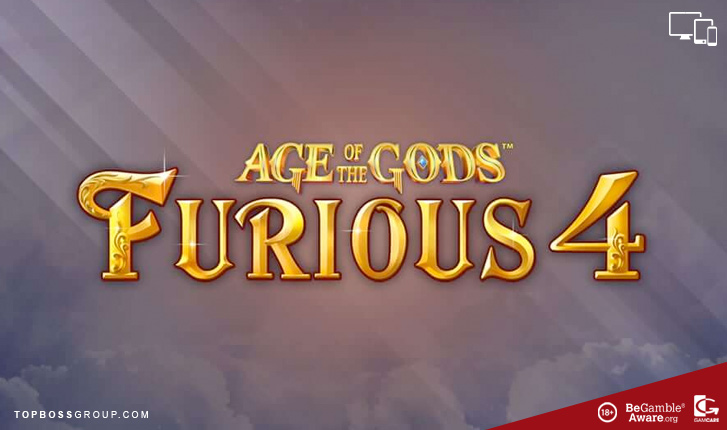 Age of the Gods - Furious 4 has been rated by our slots review team and scores an awesome 88% based from the category ratings overall.

Furious 4 Age of the Gods Review

This aesthetically beautiful themed 20 paylines, 5-reel slot by Playtech is based on Greek Mythology. The story is based on four Gods, Prometheus, Apollo, Pandora and Atlas.

Enjoy being introduced to the lesser known Gods in this mythological game by Playtech with well designed symbols upon the enigmatically night sky reels. The character Atlas a titan God was condemned by Zeus to hold up the Heavens above the earth for eternity. Then we have Pandora, she was the first mortal human created by the Gods who fatefully opened a box unleashing evil to mankind, hence the phrase Pandora’s box.

This Progressive Jackpot game is designed in such a way that each of the four Gods have their own Free Spins feature and characteristics. The game also boasts a Turbo Mode found in other Playtech games which allows you to spin the reels even faster.

The Furious 4 symbol is the highest value symbol and will pay you 10000x your line bet should you manage to get 5 on a payline, now that’s the Gods shining on you.

Age of Gods-Furious 4 has 20 paylines available to play with, however you can opt to play with fewer lines should you wish to lower your bets. Should you choose to play the maximum payline capacity you are still able to keep your bets low with bets that start as low as 0.01 per payline.

The High Rollers on the other hand can spin with maximum line bets worth 25 credits for a maximum overall stake of 500. Its also important to note that higher total bets as the Scatter symbol, the Golden Throne will multiply bets by up to 200x when 3 or more appear anywhere on the reels.

This feature is one of the games highlights, it is triggered when you get 3 or more Scatters anywhere on the reels, you will then receive 12 Free Spins with Furious 4 features available.

When the 4 Gods cover the middle reel, the following Furious Features will be triggered:

During your gameplay you may randomly be taken to the Jackpot game where you will then need to pick 3 matching symbols from a 4×5 grid of 20 squares. You will either win the Power, Extra Power, Super Power or Ultimate Power Jackpot with the latter being the highest.

The Fury of the Gods is upon us:

Age of Gods -Furious 4 is a worthy addition in this series by Playtech, with high quality design, variety when it comes to bonus features and has a relatively high RTP of 94.88%. Enjoy meeting some of less popular editions in Greek Mythology and be in awe of their rewards.

Tread carefully as we do not want any more evil unleashed or the heavens coming down on us!

Furious 4 Slots At These Casinos

Age of the Gods Ruler of the Dead Slot by Playtech

Age of the Gods - Furious 4 Overview 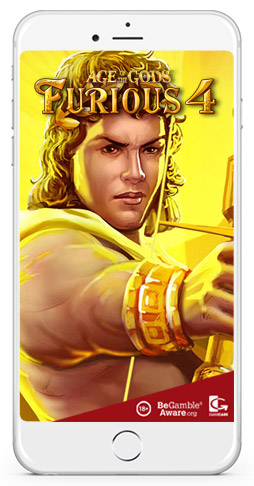 Age of the Gods Ruler of the Dead Slot by Playtech