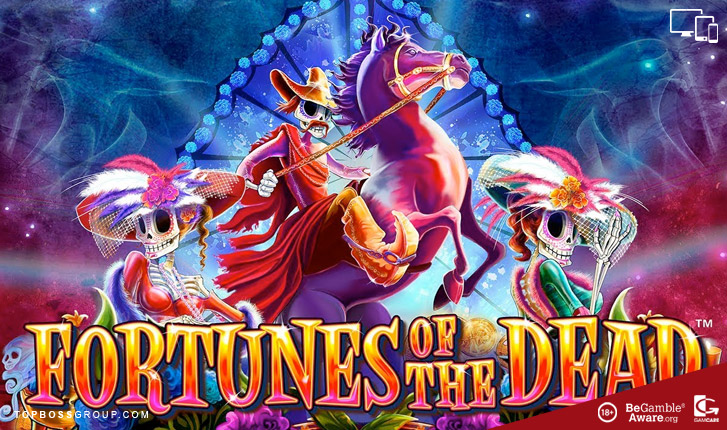 Fortunes of the Dead Ratings

Fortunes of the Dead has been rated by our slots review team and scores an excellent 87% based from the category ratings overall.

Play Fortunes of the Dead At These Top Rated Casinos

Fortunes of the Dead Slot Review:

Side City Studios have themed their 5×3 reel, 50 paylines slot around the Day of the Dead. It is an annual festival celebrated around the world and Fortunes of the Dead is a distinctive and imaginative slot filled with colourful costumes and makeup as part of the celebrations.

Players will also be celebrating Free Spins, and three surprise Bonuses whilst Mexican style music plays in the background, enhancing the senses and creating that celebratory and somewhat morbid feel to the theme.

Fortunes of the Dead is a low-medium variance slot which means players are likely to see many smaller wins. The overall theoretical RTP is 95.79% which is slightly above average and with some base payouts being up to 500x your stake.

Fortune of the Dead comes with 50 fixed paylines with bet sizes ranging from $0.50- $500. Using the Autoplay button will allow you to set up to 100 rounds of play

A celebration of Symbols:

The symbols in Fortune of the Dead distinctly relate to the theme. You will find various skeleton characters which include the Mariachi Band, a gold coin, and a barbeque, a basket filled with fruit, candles and a stack of skulls.

Fortunes of the Dead’s Wild Symbol:

The Skeleton represents the Wild with a Bull. The Wild will replace all other winning combinations except for the two bonus symbols.

Fortune of the Dead has two Scatter Symbols which are the Skull and the Skeleton on Horseback.

Deadly Bonuses in Fortunes of the Dead:

The Skull Bonus triggers by landing 3 of the Skeletons on Horseback, and they can land anywhere on reels 3 and 5. You then have to select one of the skulls to reveal your cash prize.

Once in a Wild Bonus:

The Once in a Wild Bonus Feature occurs randomly on any spin and when it happens players will be awarded a Free Spin with 4 Wilds placed on the reels. In this feature, you will win at least 50% of your total stake.

The Free Spins Feature is triggered when you land 3 of the Skeletons on Horseback anywhere on reels 2, 3 and 4. When this occurs, you will get 5 Free Spins. On each spin, a Wild will add to the reels, and they will remain in that position until the end.

Fortunes of the Dead is a slot game where a lot of love has gone into creating the visuals which are detailed and almost come to life. The bonuses are also original and varied, which is a plus as it’s guaranteed to keep the players coming back for more. The theme is otherworldly and spooky, which is an attraction on its own and summons a unique atmosphere. It’s genuinely a slot all avid gamblers should play.

For players who enjoy creepy slots, we can also recommend Lord of the Dead Slot from AllwaySpin.

Fortunes of the Dead Overview

Slots Title: Fortunes of the Dead

Fortunes of the Dead Mobile Slot 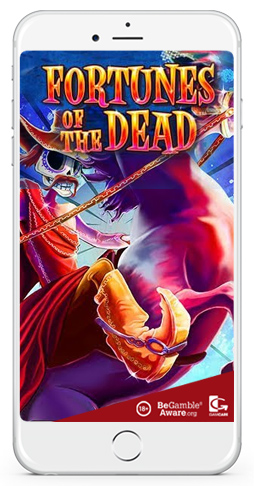