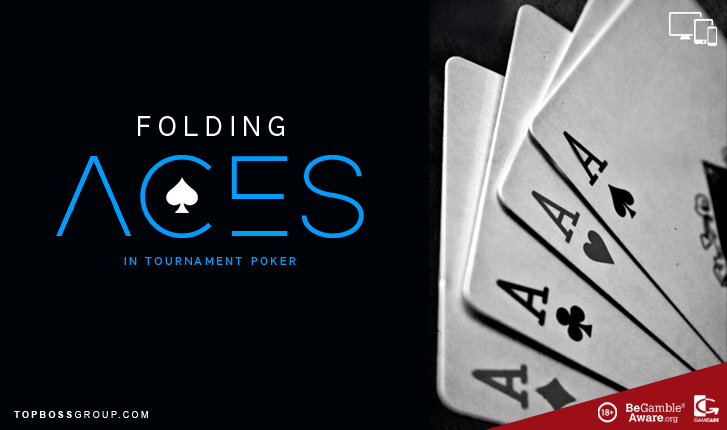 Folding Aces in Tournament Poker – To Do or Not to Do?

Keep in mind though, that there are some situations that folding aces is the best course of action.

When you play in an online poker tournament, you should always raise pre-flop when you’re holding aces. The amount you raise will really depend on the table. You don’t want to go all-in at a super-tight table and not get any calls. This would be a waste of an excellent starting hand.

Then again, if there is a bunch of loose callers at your table, someone will likely call a pre-flop all-in move. More often than not, you’ll be able to double up. Just judge your raises based on what you’ve seen in previous hands.

Is your all-in move going to be called? Do you need to keep your raises small so that you’ll get some action?

No matter how the hand plays out, you need to be aggressive with aces before the flop.

Aces are the best starting hand, but they aren’t unbeatable. You can lose multiple ways when you’re holding pocket aces. At times, the best play you can make will be to fold your amazing hole cards.

Here are some situations that may prompt you to lay down your pocket rockets.

The Board Is Paired

Let’s say that you’ve made a hefty raise before the flop, and someone called you. The flop comes out with two paired cards, and you’re opponent immediately goes all-in.

What should you do? Before any move is made, you need to stop and look at the board. Notice the two paired community cards. Now, look at your opponents chip stack. Think about the previous actions that you’ve seen from this adversary. Is this person bluffing? Are they making a desperate all-in move because they have a short stack and a scary board? Did they really just hit trips? All these concerns should enter your mind when you’re holding aces and looking at a paired board.

Look At All Those Suited Cards

What happens if there are three or more suited cards on the board? If one of your aces is of the same suit, you’ll have top pair and a nut-flush draw. If you have two aces that don’t match all the suited cards on the board, then you need to be very cautious. Don’t just lay down your aces at the sight of a heavily suited board. Stay aggressive. Throw out a feeler bet and see if there are any calls from chasers or re-raises from someone holding flush.

Connectors on the Board

Similar to an all-suited flop or a board with three or more suited cards, when you see a board that’s loaded with connecting cards, be cautious.

If there are three or four connectors on the board, be prepared to consider folding Aces. If someone is moving all in after a 9 8 7 flop, then you’re probably up against J10 or some other straight or straight draw. Be mindful of who’s raising you.

If you think you’re opponent is full of it, don’t let them steal the pot.

If you’re up against a player that rarely bluffs and this player is being very aggressive after a flop full of connectors,
then you’re going to have to fold your aces.

When you’re dealt pocket aces, you need to play them very aggressively.

Before the flop, get as many chips in the pot as possible. After the flop, continue applying aggressive pressure. If you are reraised or faced with an unfriendly board (with paired, suited or connecting cards), then you need to re-evaluate the strength of your hand.

Don’t be afraid to consider folding Aces if you feel that it’s the most strategically sound move.