Finn and the Swirly Spin Ratings

Finn and the Swirly Spin has been rated by our slots review team and scores an awesome 80% based from the category ratings overall.

Play Finn and the Swirly Spin At These Top Rated Casinos

Finn and the Swirly Spin is a NetEnt powered Slot with 5 Reels and 10 Paylines. Featuring Wilds, Free Spins, Sticky Wilds, Random Bonus Symbols and Swirly Spin. Furthermore, this innovative 3D slot is played on a 5×5 grid with Cluster Pays.

Finn and the Swirly Spin has an Irish countryside theme. The magical Leprechaun called Finn plays traditional Irish melodies on a flute.

This unique game does not feature the usual reels, rows and paylines with symbols landing on the reels. Instead, they follow a spiral pattern starting from the outside corner and ending in the centre position.

When the Wild forms part of a winning combination, it explodes and will destroy all symbols which appear vertically and horizontally adjacent to it.

Should a win not contain a Wild, then, a new Wild symbol will appear in place of the symbols that disappeared after the win.

There are 4 random features, which activate once all symbols have come to rest on a spin:

The Finn and the Swirly Spins Free Spins feature is activated when the Key symbol makes it to the center of the swirl on one spin. Moreover, Each Free Spins feature needs a certain amount of collected Keys to be open for selection:

The Autoplay option will spin the reels automatically for a chosen number of times without interruption.

Finn and the Swirly Spin General

Finn and the Swirly Spin is an innovative game with a unique concept. With a medium volatility the game can potentially offer decent payouts, especially during the free spins feature.

Finn and the Swirly Spin Overview 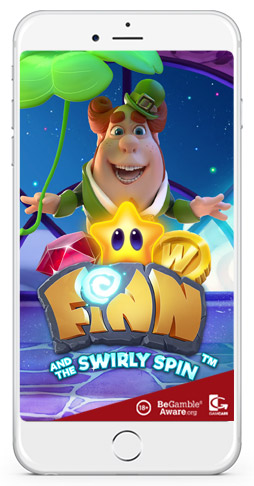