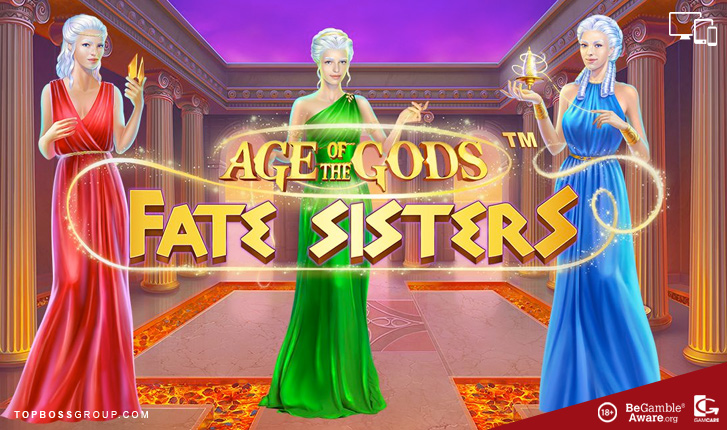 Age of the Gods - Fates Sisters has been rated by our slots review team and scores an awesome 84% based from the category ratings overall.

How To Play Fate Sisters Age of the Gods Slot

Once again Playtech has enamoured us with another Greek Mythology slot game, Fate Sisters. This 25 fixed payline 5-reel slot follows the story of the Moirai or Fates.

These three sisters Lachesis, Clotho and Atropos were the three great threads that controlled life as believed by the Greeks. Clotho spun the thread of life, Lachesis measured its length and Atropos would be the one who would cut the thread ending a life. Remarkable powers which were previously only held by Zeus.

All of this is intriguing and let’s hope the opposite is true when it comes to the slot game with its Progressive Jackpots, Free Spins round and secondary re-spin feature.

The game has four different reel backdrops and reel sets. Each sister has her own Temple for the bonus rounds and an additional Temple for the base game. Your Fate is in the hands of these three Goddesses when you enter one of their Temples.

The high paying symbols include Lachesis, Clotho and Atropos and the cards, A, J, K, Q, 9 and 10 represent the lower-paying symbols.

The Wild is a gold symbol that has the three ladies on it. It substitutes for all other symbols with the exception of the Scatter symbol which is a mystical blue feature embedded in the bark of a tree.

A Life-Changing Gift from the Sisters:

The Portal Free Spins trigger when you land 3 or more of the Scatter symbols anywhere on the reels. When this occurs, you will be able to choose from one of the following Free Spins modes:

The Sisters also reward you with one free re-spin if lady luck is on your side. This will happen if you land Lachesis on reel 1, Clotho on reel 3 and Clotho on reel 5. These ladies will then remain frozen in place and act as Scatters, hopefully bringing you a windfall.

Age of the Gods Progressive Jackpots:

The series Age of the Gods has 4 Progressive Jackpots attached to the games which are randomly awarded on any spin. The higher your bet the better your chances of hitting one of the jackpots is.

When the ladies decide its your time you will see a 4×5 grid displaying 20 coins. You will have to select three matching symbols and Voila, you are a winner.

Age of Gods – Fates Sisters is a medium variance game, and a superb addition to Playtech’s series on Greek  Mythology, introducing more interesting and powerful characters from that era notwithstanding the two separate bonus features, progressive jackpots and an RTP 92.95%.

You may also enjoy Furious 4 and Mighty Midas Slot, which are other Age of the Gods Slots. 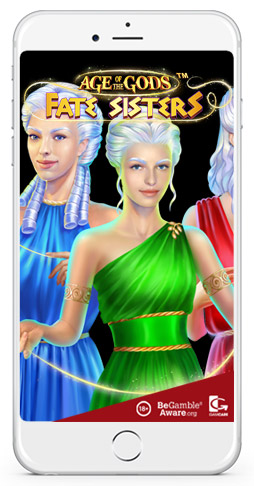