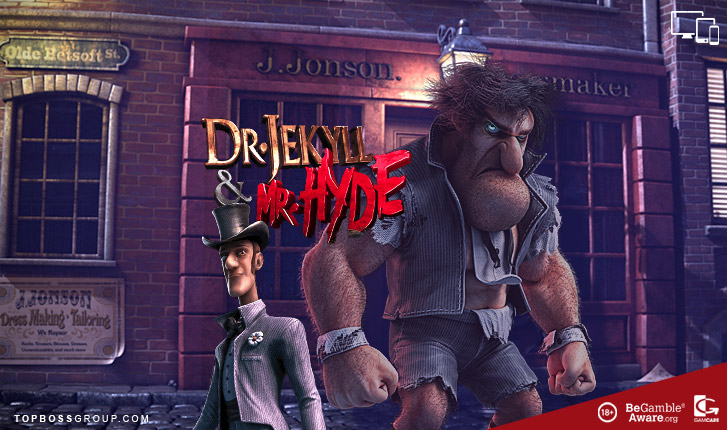 Dr Jekyll and Mr Hyde has been rated by our slots review team and scores a great 73% based from the category ratings overall.

Dr Jekyll and Mr Hyde is powered by Betsoft and is a 5 reels video slot with 30 pay lines. This slot is based on the book written by RL Stevenson which tells the tale the tale of an individual’s contrary emotions and desires, some good and some evil.

This dark mystical slot has high quality 3D graphics, breath taking animation finished off with soundtracks that capture the mystic and gloominess that lurks in the world of Dr Jekyll and Mr Hyde. The Reels are set in the library with an ominous looking Mr Jekyll standing in it.

This slot offers Frenzy Bonus features, Potion Bonus, a Double Up mini game and so many other interesting features which will keep you entertained for hours as you enter this unconventional world of Dr Jekyll and Mr Hyde.

Before you enter this ominous world, it is advisable to set your betting range which range from 0.02 to 1.00 with bets per line set at between 1-5 bet per line is to set the number of coins you wish to wager, the Select Lines will be the number of lines. It is recommended that all 30 pay lines be played.

The Dr Jekyll and Mr Hyde logo is not a paying symbol, not by itself it’s not. It behaves as a Wild when it appears on reels 1.3 and 5, these logos also contribute to bonuses making them a vitally important symbol in the game.

This bonus is triggered when Dr Jekyll appears on one of the reels accompanied by the red and blue potion symbols on reels 2 and 4 next at which point Dr Jekyll and Mr Hyde become the Wild Hyde symbol. When this occurs all the symbols on the reels go crazy and mix up changing all formation and previous combinations. This is reminiscent of some of the shifting wilds found on other slot machines.

The second Potion Bonus is triggered when the blue potion appears next to Mr Hyde. A special bonus will be awarded as well as a 20x multiplier on the original bet plus a random multiplier that awards players between 5x and 20x the bet.

Whilst playing this Potion Bonus game you will have to click on potion elements, so you can conjure up the perfect anti monster serum. The secret to bigger winnings is to find the correct ingredients post haste as it’s all about the timing. The highest bet multiplier available in this bonus is 120x.

The above bonuses do not pay out when standing alone but when combined with other symbols they do. The animations are amazing and add to the climax of the game as one watches the red potion flow from the symbol to the meter and once it has filled up Free Spins are awarded. The potion then turns blue and allows for free games to continue until enough blue potion has been collected to fill the meter.

This Bonus is triggered when 2 Mr Hyde and the Dr Jekyll and Mr Hyde logo appears on reels 2.3 and 4 in the same spin. Choices are offered to the players and he will need to choose between left and right when Mr Hyde reaches a turn on the path exploring the streets of London whilst thieving and evading the police. Make the correct turns and you will earn a bet multiplier of up to 30x.

The above- mentioned feature can be activated after any win by clicking on the Double Up button. This coin flip game is where players need to select either heads or tails, if guessed correctly their winnings will be doubled up, should you lose you will revert to the base game.

It is not surprising that Betsoft’s virtual slot version of the classic Dr Jekyll and Mr Hyde has become amongst one of the popular slots, never failing to impress they have developed a slot with impressive graphics, bonuses and features. This game is also mobile friendly and can be enjoyed on iPhone, iPad AND Windows devices. 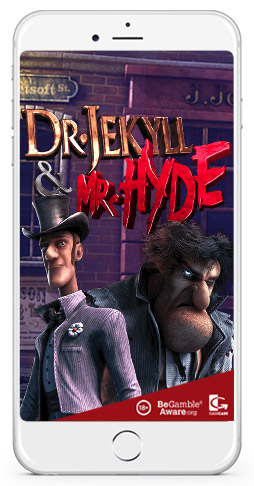