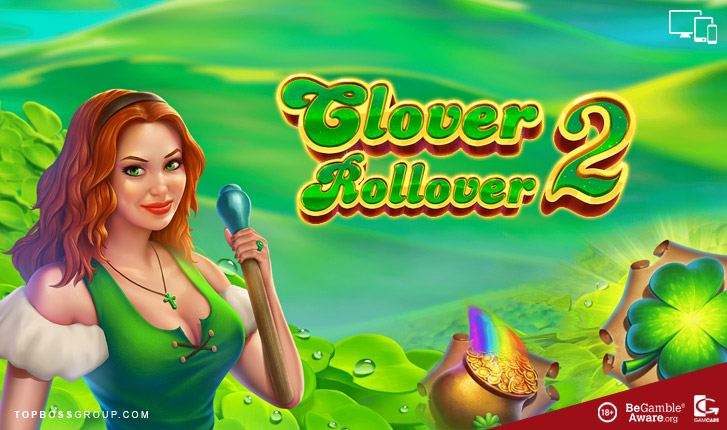 Clover Rollover 2 has been rated by our slots review team and scores a good 74% based from the category ratings overall.

Clover Roller 2 is another Irish themed slot from Eyecon. They have cleverly used the national symbol of Ireland, the shamrock, which symbolises love, faith and hope. The extra leaf gets reserved for the legendary luck of the Irish, and players will need lots of that to land the Progressive Jackpot.

Clover Rollover 2 is a follow up on the original slot game released over a decade ago, and this sequel comes with simple gameplay and almost no bonus features. However, don’t despair, as the four-leaf clover will bring you wins of up to 10000x your stake. Players also benefit from 5 paylines which pay both ways, and there is no wild or scatter symbols in the game, only good old fashioned Irish themed symbols.

It’s a low volatility slot with an RTP of 93.98%, which is a percentage higher than the original game, and it comes with three Progressive Jackpots.

The Four-leaf Clover or Shamrock is the slot game’s most valuable symbol, and it pays 2000x your stake for 5 on a payline. Should players fill the screen with nothing but 4 leaf clovers, they pocket a substantial 10000x their stake in the base game.

Clover Rollover 2 has five other premium symbols: the Pot o Gold with a rainbow, a Leprechaun hat, an Irish Cross, a fair maiden, and Irish stouts. These symbols pay between 40x to1500x your stake. The low paying symbols are the 3 Royal symbols which payout between 5x to 20x your stake.

There are 5 paylines at the bottom of the paytable section. Bear in mind these paylines pay both ways, so there are 10 ways to win.

Clover Rollover 2 is all about the base game grind and chasing the Jackpots. The sequel has retained its simplicity; however, this title comes with a three-tier Progressive Jackpot system: the Mini, Maxi, and Mega. The Mega is the jackpot players will be striving for, and it can drop randomly, so keep those reels spinning. You could walk away with a nice bankroll.

Clover Rollover 2 is an upgrade of the original game with enhanced graphics accompanied by a jolly Irish themed soundtrack. The maximum win potential is far more solid than the original game with 5 reels and 5 pay lines that pay both ways, 3 Progressive Jackpots and a max win in the base game of 10000x. Online fans of Irish themed slots should definitely give Clover Rollover 2 a spin and reel in the luck of the Irish.

Prev Next 1 of 3
eyeconprogressiveprogressive slot