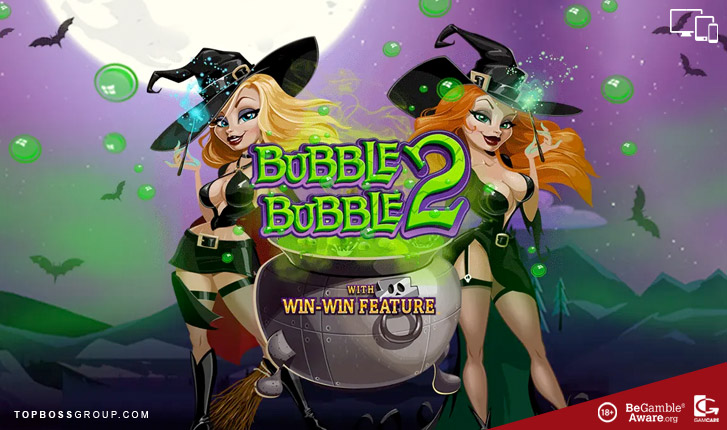 Bubble Bubble 2 been rated by our slots review team and scores an awesome 85% based from the category ratings overall.

Make some Magic with specials worth up to R29 000 Free

200%Match Bonus Up To $7'000Valid Games Slots, Scratchcards and Keno

Bubble Bubble 2 Slot is about two sexy witches who conjure up some spellbinding Halloween fun.  The Slot has five reels and 50 paylines and is an RTG Video Slot.

As they say, looks can be deceiving but don’t underestimate these two sexy witches. They are powerful, adding more magic to this sequel and more ways to win and a trio of exciting Free Spins Bonus rounds that can in a flash lead to some large Halloween payouts.

The scene is creepy complete with rickety old buildings, candles, spiders, dark forests and other spooky beings that come to life under the light of the ominous full moon. Throw in the wicked impish soundtrack and some cartoonish symbols, and it’s a game that lies between scary as well as a lighter take on Halloween.

In Bubble Bubble 2, some of the high paying icons award smaller prizes for landing two of a kind. The low paying symbols are magical implements which include spell books, love potions, creepy voodoo dolls and cauldrons.

Larger payouts come from Rats, Hats and Owls. Bats and Cats share the top of the paytable. Hit five of any of these animals and earn yourself 1000 coins. Now that’s Magic!

The Wand id the games Scatter Symbol and it triggers the Free Spin Features.

Ghosts are Bubble Bubble 2’s Wild Symbol. It completes a winning combination by substituting symbols adjacent to it bar Scatter Symbols. It appears during the Greater Ghost Feature.

Players are spoilt for choice with the games 3 Free Spin Features that award up to 42 Free Spins, and they are:

Should players land a further 3 Scatters, a further 20 Free Spins are awarded making it a total of 40 Free Spins.

The Ultra Bewitched Feature gives players 7 Free Spins along with an expanding Wild on each spin. This feature can be re-triggered when 3 or more Scatters appear.

This game comes with a Win-Win Feature, and it awards you with 9 Free Spins. Each time a Witch appears, it casts a spell that turns additional reels wild. The Win-Win Feature guarantees additional prizes should you earn less than 10x the triggering bet during the Wilder Witches Feature.

Bubble Bubble 2 is a winner. It brews up a storm with big wins, some superb Free Spin features as well as enigmatic graphics. It’s a slot game that brings the thrills and spills of Halloween to life and is very popular at Roaring 21 Casino. Furthermore, it has additional gameplay elements as the two Witches conjure up some magical wins under the glow of the full moon.

200%+ 75 Spins on your 1st depositmade via Cryptocurrency

Prev Next 1 of 3
bubble bubblehalloweenRTG Slots