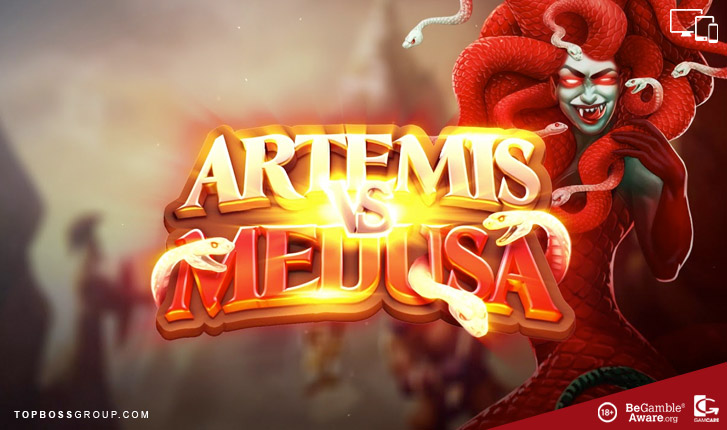 Artemis vs Medusa has been rated by our slots review team and scores an awesome 81% based from the category ratings overall.

Play Artemis vs Medusa At These Top Rated Casinos

Artemis vs Medusa Slot is a Girl Power slot where the forces of light and dark line up to do battle. It is a new video slot from Quickspin and is popular with players at Surf Casino and Tusk Casino.

This five reels, four rows, 1024 ways to win slot will see two divas of the ancient world come to blows in the Unlimited Bonus Feature. Players receive rewards whenever Artemis, the daughter of Zeus, strikes a blow and battles the evil eye of Medusa with her hissing bangs.

The reel grid of this game is placed in a rugged terrain surrounded by towering, and somewhat daunting stone guards. The misty mountain tops create that epic feel, boosted by the soundtrack that completes the eerie ambience.

Artemis vs Medusa slot game by Quickspin has a betting range that starts at $0.20 and goes as high as $100 per spin. It’s a high volatility slot with an RTP of 96.17%

There are 11 regular symbols in Artemis vs Medusa, six low paying symbols, four medium paying symbols and one high paying symbol. The low-value symbols are diamond-shaped gemstones in various colours worth 1x and 2x your stake for five of a kind.

The medium paying symbols are Harpies, Gryphons, Medusa and Minotaur’s, and they pay between 2.5x and 15x your stake. Artemis, the fair-haired Goddess, is the high paying symbol, she will pay 25x your stake for five on a pay line.

The Golden Antler is the games Wild Symbol; it assists in forming winning combinations as well as substitutes for any regular symbol.

This feature triggers when three Scatter Symbols land on the reels. A battle ensues in the clouds with Artemis on the one end and Monsters on the other. There is also a meter that records the Monsters progress. When Artemis lands on the reels, all the Monster Symbols in view are collected on the meter, and they move closer to Artemis. Added to this, for each Artemis symbol that lands a monster disappears. The player will receive a reward per the Monster Bounty Table and number of Bars. The Free Spins Feature ends when all the Monsters are slain or the meter exceeds 15 bars.

When medium paying symbols land during the base game they may have a Monster Bounty Coin on them. Moreover,  should Artemis land on the last reel all Monster Bounty Coins collect and payout. The payout is relative to the value of the medium symbol and the number of coins on the reels. The base values are as follows:

Artemis vs Medusa is unique, and clocks win of up to 5286x the stake in this slot game by Quickspin. The graphics are stunning and boosted by the perfectly matched soundtrack. Players who like fierce beauties powering their Gorgon battles and extended features are guaranteed to appreciate this game filled with mythological action.