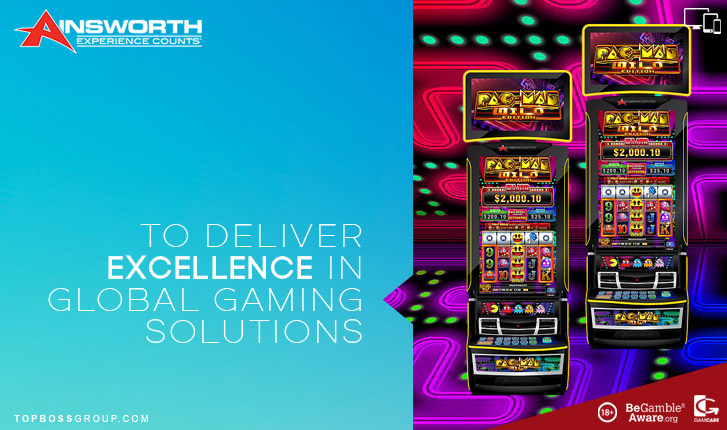 Our review team has rated Ainsworth Casino Games on the categories below and Ainsworth scores an awesome 80% ratings overall.

They have 500 employees around the world and their vision is to provide excellence in Global Gaming Solutions.

Game Connect RGS will be integrated over time with new platform providers.

How Many Games does Ainsworth Game Technology Have?

Ainsworth currently has over 35 online slots which include HD graphics, Bonuses and Free Spins.

They also offer over 550 approved game titles with 3 500 variations in land based venues. The team produce over 50 original game titles for development every year.

How did Ainsworth Game Technology Begin?

Ainsworth Game Technology was founded in 1995 by Len Ainsworth. His aim was for the company to become the leading  supplier of gaming solutions.

Apart from founding AGT, Len Ainsworth was aboard when Aristocrat was founded. Len Ainsworth has also earned the reputation: ‘Father of Video Poker’!

Initially, Ainsworth was focused on Slot cabinets for bars and clubs, but has since moved into the online gaming market. AGT entered into partnership agreements with established companies such as iSoftbet, Microgaming and Playtech. These deals helped Ainsworth to allay their late entry into online gaming in 2013.

AGT has branded its online casino solutions under the name of: Ainsworth Game Technology Interactive.

The video slots by Ainsworth offer detailed graphics with high-quality and realistic HD designs and professional audio.
Ainsworth video slots are mostly volatile with bonus features such as free spins that come with some big multipliers. Most of the video slots feature a round of spins that makes use of an alternative set of reels.

Some of the AGT slots include Multi-Games with Multi Denominations, and progressive Mystery Jackpots.

Ainsworth offers Mystery Jackpots which pay prizes at random. The thrill is that you never know when the next jackpot will be paid out. Just imagine, the next big win could be waiting around the corner!

For each bet on these games, a portion of the bet will be contributed to the prize pool. Some of these games are linked across many casinos which means the jackpot prize increases all the time. Some of the Progressive games are: Big Chief Mystery, FireStorm, Golden Goose Mystery, Legends Series and World of Jackpots.

Does Ainsworth Game Technology have a Mobile Platform?

Most of the Ainsworth slots are multi-platform and work perfectly on laptops and mobile devices. This is because the  games are developed in HTML5 format.

Play on Android and iOS platforms such as Smartphones, iPhones, Tablets and iPads.

Sheer Magic Slot Play To Get The 3000x Multiplier