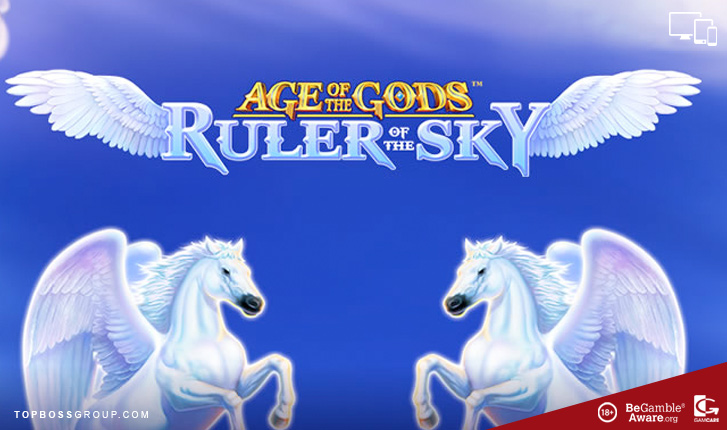 Age of the Gods - Ruler of the Sky Ratings

Age of the Gods - Ruler of the Sky has been rated by our slots review team and scores an awesome 85% based from the category ratings overall.

Age of the Gods Ruler of the Sky Slot Review

Age of the Gods Ruler of the Sky Slot – Playtech developed the Age of the Gods series when its licenses to use Marvel Studios content was not renewed by Walt Disney. Little did they know out of necessity they would develop some of the most popular slots.

This slot 40 paylines, five reels Video slot is like the other games in the series, meaning it to is based on Greek Mythology and due to the Age of the Gods -Ruler of the Sky’s brilliant graphics and attention to detail it has risen to instant popularity.

The theme is based on Pegasus the winged horse of mythology and is set against a tranquil blue sky with clouds scudding across in the background. When the spinning begins the background changes and a deep purple with streaks of gold appear adding to the mythological ambience.

There is no shortage of animation and is particularly effective when Pegasus gallops across the screen. Furthermore, the symbols fade into black when you get a winning line.

For those of you who did not know, Pegasus is Poseidon, God of the Sea and Medusa’s offspring. So guaranteed you are in for a treat when playing this slot game.

Pegasus is the Wild Symbol in this slot game and this magnificent Steed pays 1000 coins for five wilds, 200 for four and 50 for three. The Wild substitutes for all other symbols except for the scatter of course and can be stacked anywhere on the reel.

Another exceptional feature the Wild symbol offers should you land 3,4 or5 wilds on a win line you can win 50x,200x or 1000x your line bet.

Symbols to keep you flying high:

The Scatter Symbol is the Gold Laurel Crown which has the games name etched on it. The Scatter can only appear on reels 2,3 and 4, by getting three scatters in a row on adjacent reels you will trigger the Mighty Pegasus game feature with Free Spins.

In addition, there are more Pegasus Wilds in the feature free spins game allowing you more chances to win, also the free spins allow you to win more free spins indefinitely, a reel game changer!

Landing three scatters on adjacent reels in the free game feature will give you five more free games.

Pegasus at his Ultimate Best:

There are four progressives to win and are all activated at random. The smallest being the Power Jackpot, moving onto the Extra Power, Super Power and Ultimate Power Jackpot which are all up for grabs no matter what your stakes are.

Like all the other slot games in this series, it features 20 coins in a grid, simply pick the coins to reveal jackpot symbols until you match three identical symbols and you will be rewarded accordingly.

Age of the Gods Ruler of the Sky Slot Conclusion

This new edition to the Age of Gods Series is an exciting slot game. It has an abundance of bonuses and payouts. Plus their amazing Progressive Jackpots.

Soar to new heights with this majestic winged horse and enjoy the magical prizes he offers.

Age of the Gods - Ruler of the Sky Overview

Slots Title: Age of the Gods - Ruler of the Sky

Age of the Gods - Ruler of the Sky Mobile Slot 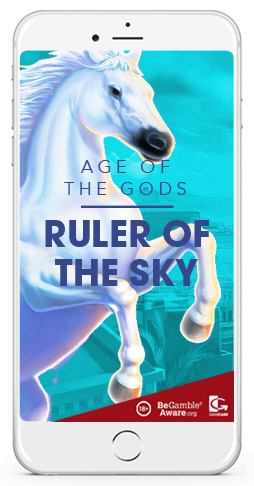