Medusa and Monsters Expanding Wilds In Age of the Gods 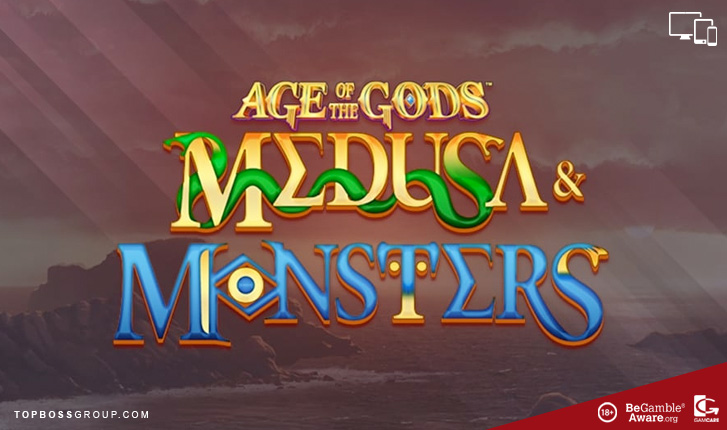 Age Of The Gods - Medusa and Monsters has been rated by our slots review team and scores an awesome 88% based from the category ratings overall.

Play Medusa and Monsters At These Top Casinos

Playtech’s Ancient Greek themed Snake- haired Gorgon is at the focal point of this game. This 6- reel, 164 fixed paylines Age of Gods- Medusa and Monsters slot comes with stacked symbols on each reel, stacked wilds as well as a free spin round with shifting Medusa Wilds which can be enjoyed on your desktop, tablet or mobile device on the OS platform as it is designed in HTML5 format.

The setting of this slot is a rocky beach scene with crashing waves, set against a cloudy, flame red sky, with snakes curling around the outside columns of the slot. There are also four displays above the game window which show the current value of the four pooled progressive jackpots.

The sound track has an eerie and mysterious classical tone to it, with drum noises in the background which are only interrupted by the usual win and teaser sounds

The symbols you will see are the lower value, differently shaped gemstones in blue, green, red and diamond colours. The medium level symbols are a helmet, a dagger and an ancient Greek warship. The superior symbols are the dog Cerebus, Minotaur in all his muscular glory and finally, scantily clad Aphrodite.

The Wild Symbol in Age of Gods- Medusa and Monsters is Medusa herself, she expands to cover the entire reel whenever it appears on a spin.

The Scatter symbols are represented by the Ancient War Shields, these appear in stacks of up to two on reel, two, four and six only. Thirty Free Spins can be triggered when you land three or more Scatter Symbols.

Medusa’s Gaze Free Games feature is triggered when you land scatters on reels, two, four and six. You will be presented with three War Shields and must pick one to reveal one of three of the high paying symbols which will then become the sticky symbol. This symbol will remain in place for the duration of the game.

How it works is a “reel” tall Medusa appears at the start of the feature on reel 6 and she moves by one reel on each Free Spin, should your selected symbol appear it will be petrified and stay locked on the reels until the Medusa symbol hits it.

Should you be lucky enough to fill the whole grid before the Spins end your single free game spin will yield you 492x bet.

Wins are calculated and paid after each Free Spin and the round ends when the Medusa symbol hits reel one.

The Progressive Jackpots are pooled from all the Age of Gods games and the jackpot bonus game can be triggered at random on any spin.

The higher the bet the higher your chances of entering the bonus game are. A display of 20 coins will appear and your goal is to find three matching jackpot symbols which could make you an instant magnate as the Ultimate jackpot has been known to pay out six figure sums.

Playtech have outdone themselves when they launched their Age of Gods series in 2016. They certainly got the recipe right by incorporating Progressive Jackpots into the game play making these slot games amongst the favourites in the slot-playing community.

Age of Gods-Medusa and Monsters certainly does not disappoint, it is entertaining, rewarding and the visuals are exceptional, a welcome addition to the series.

Get ready to face this Snake Haired Gorgon and she will have you hissing and reeling in no time, that’s if your lucky enough to escape her stone-cold gaze.

Slots Title: Age Of The Gods - Medusa and Monsters

Age Of The Gods - Medusa and Monsters Mobile Slot 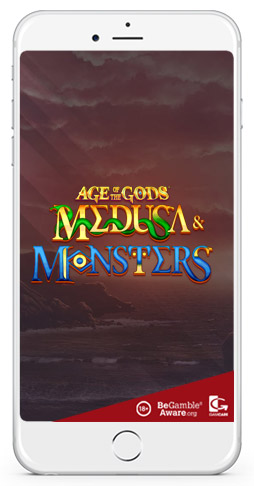