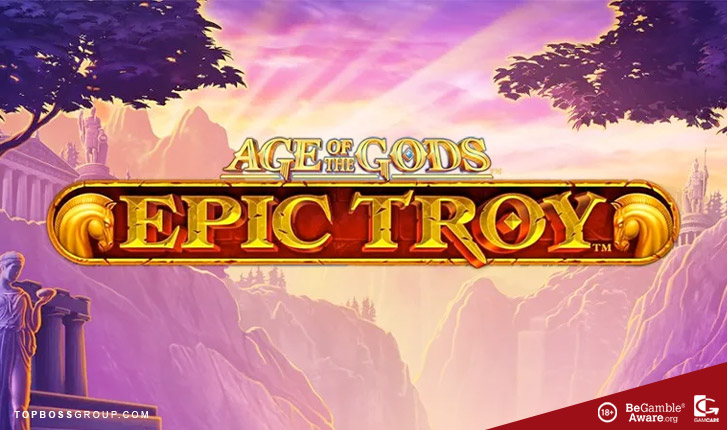 Age Of The Gods - Epic Troy has been rated by our slots review team and scores an excellent 89% based from the category ratings overall.

Play Age Of The Gods: Epic Troy At These Top Rated Casinos

Age of the Gods Epic Troy Slot is another slot from the Age of the Gods Slot Series from Playtech. In Greek Mythology, the Trojan War was a war between the Greeks and the people of Troy. This war began after the Trojan Prince, Paris abducted Helen, the wife of a Spartan. The Trojan War started as a way for Zeus to reduce the ever-increasing population of humanity and an expedition to reclaim Helen.

This Trojan War has left us with phrases such as Achilles Heel and Trojan Horse, and Playtech has now included it into their Age of Gods Series. The game centers on the three most important characters in the story, namely Helen, Paris and Achilles.

Age of Gods Epic Troy plays out on five reels, three rows and 243 ways to win.

The betting range in this Progressive Slot starts at $0.20 to a maximum of $500 per spin. The games RTP is at 96.50%, which is pretty decent for a medium to high variance slot.

A Trojan of Symbols

The most valuable symbol in Homers Iliad’s is Helen of Troy, the woman who launched a thousand ships. Following Helen is the symbol of her lover Paris and to set the scene for the war, you have Achilles the great warrior and legend. The paytable for landing five on a payline is as follows:

The Scatter Symbol in this slot game is the Shield, and 3 of them trigger the Free Spins Feature.

In this game, there are 3 Bonus Features, one for each of the main characters. Helen, Paris and Achilles.

To trigger the Helen Re-spin feature, you will need to land at least two full stacks of Helen Symbols on the same spin. These stacked symbols then become Sticky Symbols, and you get 3 Re-Spins. Should new Helen Symbols land, they too become Sticky, and you receive a further 3 Re-Spins. This feature will continue for as long as you land new Helen symbols or until the whole screen is covered by nothing but that symbol.

The Paris Re-Spins Feature is triggered when you land two fully Stacked Paris Symbols on the same spin. When this occurs you will receive 2 Re-Spins, and any new Paris symbols landed become sticky, and your re-spin tally resets to 2 again. The aim in this feature is to create the Mega Reel, and that happens when you land three or more adjacent Paris Stacks which will give you additional payouts. Below are the rewards you will receive:

Achilles Re-Spins are triggered when you land 2 Achilles Stacks on the same spin. In this feature, you only receive 1 Re-Spin, and the Achilles Symbols remain in place. The two triggering Achilles symbols will act as Stacked Wilds on the Re-spin.

Landing at least 3 Scatter Symbols/Shield on the same spin will trigger the Free Spins Bonus Round. You will then receive Scatter Wins of 1, 10, or 50x your bet. However, this depends on how many Scatters you landed. Further to this, you will receive 6 Free Spins.

During the Bonus Round, you will only land Scatters, Wilds and the three main characters, no low-value symbols. This feature can also be re-triggered, giving you a total of 12 Free Spins in all.

This new Age of the Gods – Epic Troy slot is part of the Age of Gods series and also comes with 4 Progressive Jackpots. The Jackpot feature can trigger randomly, which will take you into a 4 x 5 grid with 20 coins to choose from.

You will then need to match up three identical jackpot symbols, and then you win the slots matching Progressive Jackpots, which are:

Visually this game is magnificent, and Helen is as beautiful as legend has it. The three re-spin features are innovative, and of course, Helen gives you a chance to fill those reels with the highest value symbols to gather some sweet loot. Age of the Gods – Epic Troy pays out up to 607.5 x your bet. Not the biggest of wins but the 4 Progressive Jackpots make up for this. Age of Gods, Epic Troy jackpot slot is most certainly another welcome addition to the popular Age of God Series by Playtech.

Age of the Gods: Norse-Ways of Thunder Slot 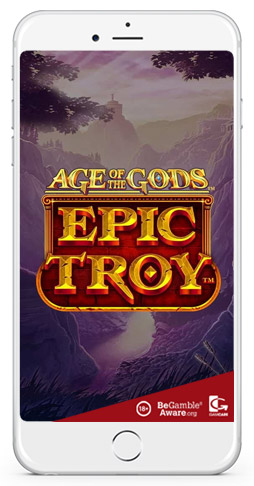