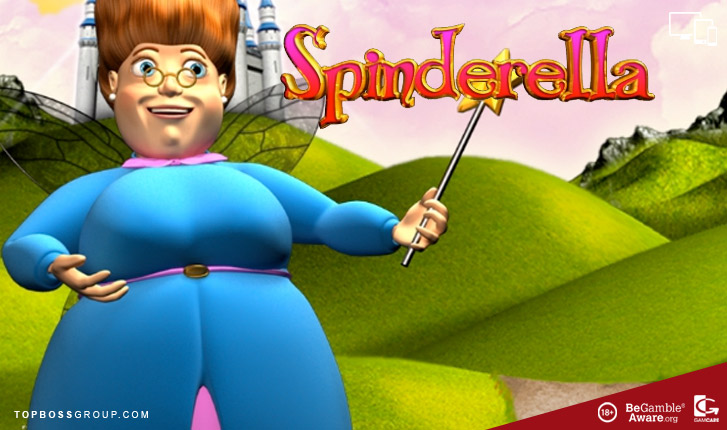 Spinderella has been rated by our slots review team and scores an awesome 90% based from the category ratings overall.

Spinderalla is a Novomatic slot with 5 reels and 20 paylines and is playable on all devices.

This Slot has an obvious Fairy tale theme, the one where Cinderella is sent to the ball by her Fairy Godmother, we too, are going to see her magic at work as she delivers up to 50 Free Spins and Wild Multiplier’s of up to 10x with the wave of her Magic Wand.

The 3d Graphics are amongst some of the best Novomatic has produced and it is action packed thanks to the base game multipliers. The sound effects compliment this brightly coloured slot game and like the Graphics, are first class.

Joining the lower cards are the Slipper, Carriage, Pumpkin, Castle and Servants Buttons, 5 of the Buttons will get reward you with 25x your total bet.

The Wild Symbol is represented by Spinderella herself, she replaces all the other symbol except for the Fairy Godmother who is the Scatter. Whenever Spinderella forms part of a winning combination a randomly chosen multiplier is applied to the payout and they can be bolstered by up to 10x.

Spinderella also has a Free Spins Bonus feature which is triggered by the Fairy Godmother she loves giving and she is no exception here, land 3 or more of the Fairy Godmother Scatter Symbol on the same spin. Start spinning those reels and she what surprise she has left for you, could be up to 50 Free Spins.

The Magic does not end, any of the following symbols those being a Button, Coach, Slipper, Castle or Pumpkin will transform into an extra Wild during the Free Spins Feature as well. This works in a comparable way to the Spinderella Wild where a multiplier of up to 10x is awarded whenever the bonus wild is part of the winning line.

The gist to this happy ending could mean you will have 2 Wilds, a possible 50 Free Spins with a 10x Multiplier. Sound like a Fairy tale to you?

This Slot has a Gamble Feature so get reeling as once that clocks strikes midnight you could be turns into a pumpkin. This feature can be activated after each win and you will have to guess the colour of the card that is to be drawn.

Should you receive a little help from The Fairy Godmother and guess correctly your winning s will be doubled, 5 guesses are allowed per round. A wrong guess, you lose everything and are taken right back to the base game.

If you like the theme and need a bit of Magic and happily ever after then Spinderella is one to consider as it offers solid entertainment and a RTP of 95.17. 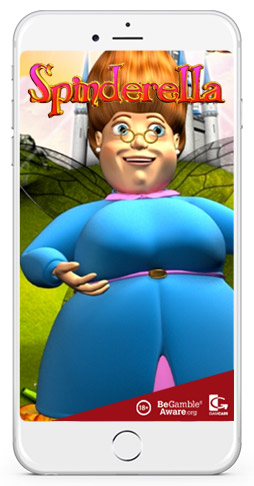