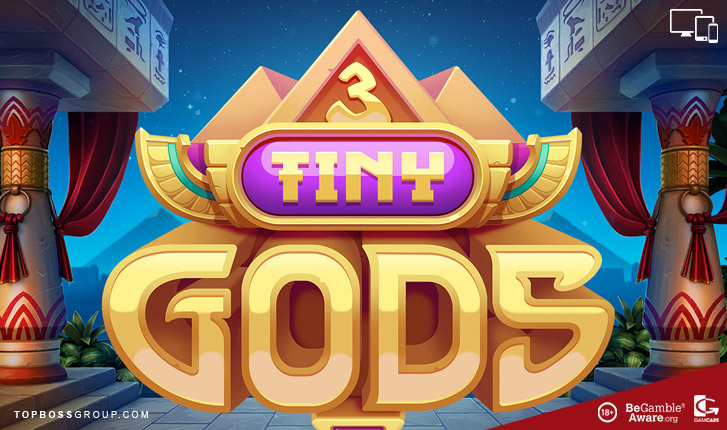 3 Tiny Gods has been rated by our slots review team and scores an awesome 82% based from the category ratings overall.

Mighty Spinners get ready for this new slot release 3 Tiny Gods Slot from Foxium powered by Microgaming. It’s five reels, four rows and 30 fixed paylines Video Slot where wins are awarded for three to five matching symbols on a line from right to left only.

This new release 3 Tiny Gods brings the Egyptian Pantheon to pint-size life. Filled with a treasure trove of exciting features, players uncover pyramids worth of excitement and the chance to take home 5000x their total stake.

All three tiny Gods have unique game-changing powers that align the games special features. The Jackpot mini-game can unearth one of the three tired Jackpots unlocking riches worthy of a Pharaoh.

Players can travel to Ancient Egypt on their desktops or mobile devices from $0.10- $50 credits per spin. Activating the foxify mode will increase the betting range to $0.15 – $0.75 credits on this medium volatility slot with an RTP of 96.40%.

The Ancient Shrine is the Scatter Symbol in 3 Tiny Gods, and it triggers the Bonus Game.

The Mystery of Horus Feature can be activated randomly on any spin. Furthermore, Land the Eye of Horus symbol on any two or three adjacent reels to fill the entire reel and these symbols are replaced with random symbols raking in some huge rewards.

The cat Goddess Bastet appears subtly, however, do not underestimate her powers as she is mighty.  Bastet randomly triggers the Gift of Bastet Modifier after a losing spin, moreover reshuffling the symbols on the reels creating the best possible winning combination.

Free Spins and the Wrath of Anubis

Landing Scatters anywhere on the reels 1, 3 and 5 in one spin will trigger 8 Free Spins. First, the Mystery of Horus will activate on each Free Spin, turning two or three reels into Mystery Symbols. Secondly, the Wrath of Anubis triggers up to four times during the Free Spins Round. This God can award three extra spins and remove the lowest value symbol from the reels until all Free Spins have been exhausted.

Players can pay an additional fee to activate Foxify. It then gives them the chance to trigger the Mystery of Horus Feature and Free Spins during the base game.

When playing 3 Tiny Gods any spin in the base game a coveted stack of coins may appear anywhere on the reels. Each coin collected players stand a chance of triggering the lucrative Jackpot Bonus Game. The Jackpot Bonus Game awards either 15x, 100x or 5000x your bet.

Once the Jackpot triggers, three columns filled with scratchable boxes align. If a coin appears above any one of the columns, players can scratch the boxes to reveal the Jackpot won. To show the 3 Tiny Gods Jackpot all the boxes in the corresponding columns need to be revealed.

Players may think it’s just another of the many Egyptian themed slots, well it’s not it’s a humorous version, and the animations are comical and graphically magnificent. 3 Tiny Gods Slot is not a tedious game as the base game is frequently interrupted by the random features. The main attraction is the Jackpot Bonus Game where players can win up to 5000x their bet.

Prev Next 1 of 3
foxiummicrogamingnew slot

Softswiss And Yggdrasil Strike A Partnership